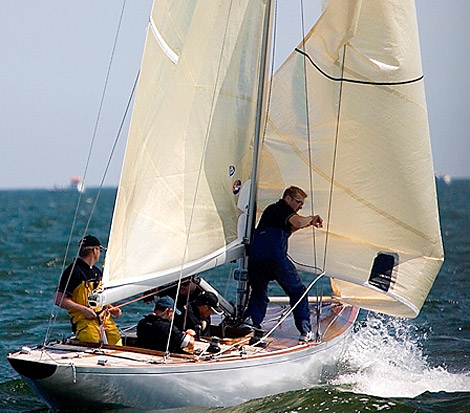 Borée II was brought in Finland from Geneve year 1990. The boat was completly renoweted by Veistokaari boatyard Oy and the old plywood deck was replaced with teakdeck. 1999 some minor fixing will be done and possibly a new rigg.

Christian Uggla and Bobby Ekblom had participated in races as guest crew members and became entirely smitten by the
Classic 6mR Class magic. They began planning the purchase of a yacht in order to get involved as consistent participants in
the Finnish 6mR racing circuit. In 2004, Chrisse and Bobby joined forces with Leo Reenpaa as the new owners of Borée II.
She was rebuilt and fitted with a new competition-class rig in Harry Thonebergs Emäsalo Boat Yard in preparation for the
2005 racing season.

Borée II placed fifth in the Hango Regatta 2005. She also participated in the Classic 6mR World Cup in Sandhamn, but was
forced to withdraw as a result of damage incurred due to choppy seas during the race.

In the 2006 season, Borée II placed fifth in the Helsinki Regatta and ranked seventh over all for the Finnish 6mR season.