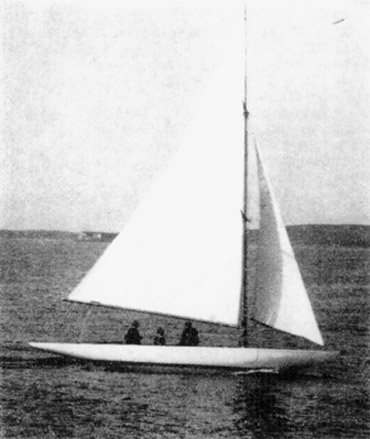 Borgila was the only Nicholson designed 6mR to be built outside of Gosport, at Ängholmens båtvarv in Långedrag outside Gothenburg, Sweden. It was commissioned by a consortium at G.K.S.S. (Göteborgs Kungliga Segelsällskap) and the first owner was mr. Dan Broström, a shipping owner, member of parliament, naval minister and president of G.K.S.S.

Borgilas hull was constructed of white-painted mahogany, the deck of Oregon pine and the rig of spruce. The yacht was classed by Lloyds register. The simultaneous construction process of this yacht and a Mylne design (Gripen) was followed by enthusiastic G.K.S.S. members, in Seglarbladet N:o 7, April 10 1924 we read "båten, som konstruerats av Nicholson, bär friskvindsbåtens prägel med ett stort starkt underskuret skrov och kraftiga linjer. Den har en rätt kort och djup köl. Det blir en synnerligen rymlig båt. Båda båtarne byggas på träspant utan ett enda stålspant i skrovet." [ ...the boat, constructed by Nicholson, is a characteristic heavy weather boat with a large, heavily undercut hull and forceful lines. It has quite a narrow and deep keel. It will be an extraordinarily spacious boat. Both boats are built on wooden frames without a single steel frame in the hull.]

Borgila was raced for only one season by the first owner. He unsuccessfully tried to qualify for the Olympics in Le Havre and the Gold Cup in Hankø. Already in 1926, Borgila was de-commissioned as a true racer and modified for cruising at Abrahamsson & Son. Since then the yacht has gone through many stages of deterioration and repair. For example she has had an iron keel and has been shortened by 60cm in the aft, both of which have been corrected.

Presently Borgila is undergoing some refitting at Kim Loueniva´s boatyard in Parainen. First the structurally important problems will be repaired. The process is ongoing, and eventually also the deck will be returned to its original flush design.

The original 1924 measurements were:

After the decommissioning in 1926 her strategic measures were: