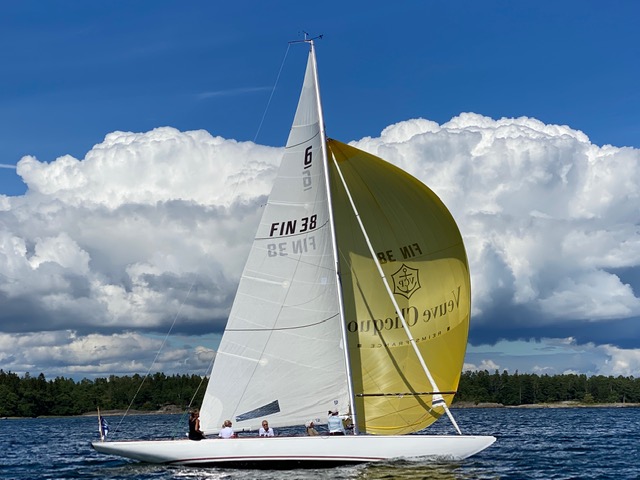 FIN 38 Mariana (G. Jacobsson, 1938)Mariana was built in 1936 by the Wilenius boatyard at Borgå, Finland.Her first owner, Gunnar Jacobsson, a member of NJK (Nyländska Yacht Club) in Helsinki, also designed her, thus initiating Team Mariana´s slogan: "The secret to getting ahead is getting started!".

Mariana is Gunnar Jacobsson´s only Six Metre design. She got her name from Jacobsson's wife, Sally Mariana. She has a rating configuration of light displacement, long measured length, small wetted area and small sail area. She performed well upwind but wasn´t competitive with the all round performance of Tore Holm's designs

of the same period. During 1936-1940, we find her typically in the middle of the pack. She was sold to a German military attaché in Stockholm in 1941 and then had six Swedish owners during the period 1941-1977.

It was love at first sight when Rabbe Kihlman and Mats Andersson saw Mariana in Sandhamn in 1975. After two years of serious negotiations, she returned to her original home of the Finnish Archipelago. In 1991, Rabbe's second cousin, Erkki Kairamo, bought a 3⁄4 share of Mariana. Rabbe and Erkki's sons Antero, Eero and Jaakko often sailed as a crew of 4

Mariana went through a major renovation 1973-1975 in order to be at her finest for the 1975 World Cup. After the new partnership in 1991, 30 new ash frames were installed. Similarly, a couple of planks, the rudder and

the metal floors were renewed. The original Honduras

mahogany was still fine on the topsides but some parts of underwater hull needed new planks. Mariana went through a second major renovation in 2000/2001 and while the skeleton was still new, the underwater boarding and massive woods were totally renewed during the renovation at M-Yachts Lovisa, Finland, by Martin Rosenstedt.

She got a completely new teak deck and everything inside was sandpapered and varnished. The deck layout was not changed