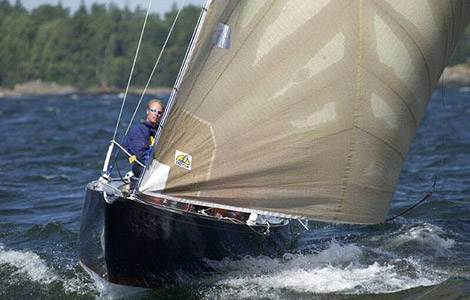 SUMMARY
6 mR yacht Klara Stjärna was built in the late thirties and stood ready for the summer season 1938. Her construction is light and beautiful and her blue coloured hull can be clearly identified in the six meter fleets' starts. However, during the past two seasons her colour has been yellow and silver. What is the colour this year remains to be seen. Her life has been two-parted in a special way: The first two thirds of her life she sailed under the flag of the Finnish Navy with a number of helmsmen and crews; the latest third of her life she has been privately owned by Harry Thuneberg and has sailed mainly under his command.

The yachts name, Klara Stjärna, meaning "The Clear Star", has been unchanged since the start and only 3 owners have been registered. For Harry and his crew racing is both serious and fun with best results being among the top 2-5 boats in national regattas.

HISTORY
The two very first seasons the Klara Stjärna sailed as a private-owned yacht, under the command of Mr Anders Kramer who also had ordered her. However, even before World War II reached Finland, Mr Kramer donated his 6 metre yacht to the Finnish Navy, to be used for recreation.

During the wartime she was docked and surprisingly, did not lose her lead keel to weapon industry purposes.

From 1944 to 1982 she took part in races and regattas with results varying heavily from season to season and from race to race. Because of constantly changing crews with new Navy cadets and officers the wear and tear was heavy. Equipment was not of the highest quality and few crews had enough responsibility to keep her in proper condition during winters. The Klara Stjärna went through one renewal process in 1968 but the Navy did not have the funds needed for a greater renewal at the beginning of the 1980's and therefore she was sold. Yard owner Harry Thuneberg was the lucky new owner of the yacht.

The boatyard Emsalö Båtupplag, partly owned by mr Thuneberg, had appropriate facilities for the costly and time consuming renewal project which lasted for four years. In 1986 Klara Stjärna stood ready for new challenges, coloured blue, as recollected from her Navy years.

RACING RESULTS
During her years, the Klara Stjärna has proven to be an excellent racer especially in light winds. Several starts have been won, most of them in light breezes. In windy circumstances the success has, however, been weaker with very few 1st places in total scores as a result. In order to improve her hard weather qualities much work has been done on the hull, rig and also sails, especially during the 21st century

For the Europeans 2002 new light and heavy genoas were sewn. As the crew was unchanged during several years, the teamwork was optimized and racing results got better. Klara Stjärna was ranked #2 both in 2003 and 2004. She also won the championship of the 6mR class in Finland in 2004. And as the season went further the placings improved. With a new set of sails in 2005 the yacht ranked #1 in Finland. In The Worlds in Sandhamn 2005 a 6th position was the best the crew could achieve in the windy weathers and rough sea.

Klara Stjärna did not race very actively during seasons 2006-2007. Her 70th anniversary was celebrated during the Hangö regatta races 2008, where all old friends and crew members met on her deck. There has not been any major investments in equipment for the anniversary, but despite, the beauty stays. During the latest decade Klara has proven to be a chameleon: Her hull has been coloured clear blue, dark blue, yellow, metallic silver and in 2008 metallic dark red.

Media visibility has always been natural when it comes to Klara Stjärna. The crew arranges various public performances but also internal happenings, e.g. a winter happening has occurred every year since 1994. Klara Stjärna's crew members are well known for all R-class sailors for their musical entertaining capabilities.